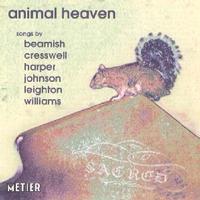 Lyell CRESSEWELL
Prayer to appease the Spirit of the Land

Animal Heaven features 6 Scottish and Scottish-based composers writing for soprano and instrument(s). While the combination of recorder, cello and harpsichord might suggest the hues of a baroque continuo ensemble, in the hands of Harper, Leighton, Williams and Johnson, this trio provides a vivid spectrum of timbral colour.

Alison Wells, particularly well known from her appearances with ensembles in the music of Birtwistle, Barraqué and others, emerges as a chamber musician of utmost subtlety and flexibility, delivering the poems of Edward Thomas, Walt Whitman, Edward Lear and others with clarity and passion.

Questions from customers about Animal Heaven

What do you want to know about Animal Heaven?