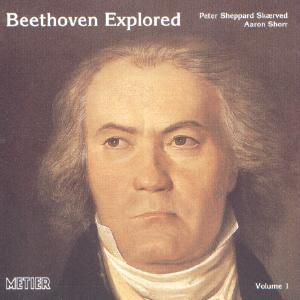 Efherzog RUDOLPH Variations in F major for violin and piano (110)

MUSICAL POINTERS - Peter Grahame Woolf
"To start at the end, this is an auspicious Volume 1 to launch Metier's Beethoven Explored series, and it begins with an ideal performance of Beethoven's last sonata Op. 96.

That is an endearing and unique work which I particularly love and cherish - and in earlier years had often played it at home with violinist friends. Everything here makes me smile with pleasure at its 'rightness' - balance, articulation and phrasing, and the tone quality of both instruments (Peter Sheppard Skærved plays the RAM's 'Habaneck' Strad and Aaron Shorr the Steinway D at St John's Smith Square, perfectly set up for this repertoire). The cover portrait of Beethoven is perhaps a little severe for this particular sonata and the genial music accompanying it.

The series aims to present the Beethoven violin sonatas in their social and musical context. Here we have early duo pieces by Beethoven and an ambitious, interesting set of virtuosic variations by the sonata's dedicatee, Archduke Rudolf, on his little minuet which 'progresses through contrapuntal couplets, canons and inversions before breaking into romantic rhapsodising'. Peter Sheppard Skærved, who writes the compendious notes, wonders if Beethoven himself might have written the adagio variation towards the end.

I am tempted to say this is the best recording of Op. 96 I know, though recognising that unless you are a diligent comparative reviewer, the present (when it is good) always tends to dominate the past. No worry or competition though; this series is unique in its purpose and as such is to be unreservedly welcomed. Full informative background notes by the violinist and everything else in the safe hands of David Lefeber."

GRAMOPHONE - Duncan Druce
"A Thoughtful Beethoven's violin sonatas' concept, with performances to match" "There must be many different ways of exploring Beethoven. Imaginative programming - putting Beethovens last violin and piano sonata together with a work by his most illustrious patron, and adding two pieces from the beginning of his career - is certainly one way, and Peter Shappard Skærveds unusually extensive notes, fascinating if slightly contentious, continue the exploration in another direction. But are the performances also searching and exploratory?

The playing is articulated with beautiful clarity, (enhanced by a notably clean recording); its a well-lit musical landscape in which all kinds of harmonic and textural details achieve prominence, Skærveds assertion that Op. 96 is a legato piece, written to exploit the style of Pierre Rode (who with the Archduke Rudolf gave its first performance), is given substance by his fine tone and persuasive cantabile style. Other performers - Argerich and Kremer, for instance - have been able to make the sonatas meditative passages more solemn and mysterious, and the same objective manner characterises the Wo041 Rondo, which is bright and lively but needs more graceful expression to show the rise and fall of each phrase.

The Archdukes large-scale Variations are performed with great gusto; Aaron Shorr makes a fine effect with the long coda, like an improvised piano cadenza to which the violin makes an occasional contribution. And it certainly adds something to our impression of Beethoven to hear so many elements of his piano style being taken over by his royal pupil."

What do you want to know about Beethoven Explored Volume 1?