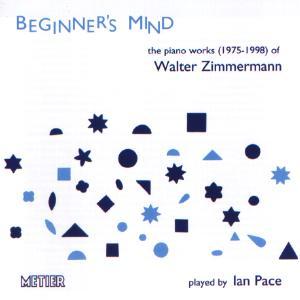 The Guardian - Andrew Clements - Classical CD of the Week
" Zimmermann attended composition courses given by Mauricio Kagel in Cologne, and studied ethnology in Amsterdam, but was predominantly self-taught as a composer. In the 1970s he put together an important collection of interviews with American experimental composers, Desert Plants (not even mentioned in the Grove article), and later edited the writings of Morton Feldman, and it is that experimental tradition, stemming from Cage (and perhaps even back to Satie) that forms the background to Zimmermann's own music.

Ian Pace's collection of keyboard pieces shows very well how Zimmermann has created his own distinctive musical world from those sources - works in which the focus is on the nature of the musical material itself rather than on the way in which it is expressed. Zimmermann was one of the prime movers in the "New Simplicity" movement that offered an antidote to the post-serial complexities of German music in the 1970s, especially in his cycle Lokale Musik (1981), which assembled a series of solo, chamber and orchestral works out of the folk tunes of his native Franconia.

His best-known work, however, remains the hour-long solo piano Beginner's Mind (1975), which takes up the whole of the first of Pace's two discs. It was written under the influence of Shunryu Suzuki's Zen tract, Zen Mind, Beginner's Mind, which proposes a three-part spiritual journey towards true enlightenment.

Zimmermann's 40 short pieces follow that course, progressively simplifying their musical means after a prologue, Five Moments in the Life of Franz Schubert, in which aspects of the old mind, the mind that is about to be transformed, are presented. The spare stillness of much of the piano writing, and the ways in which it is constructed from grids of pitches in permutation, inescapably recalls Feldman's music. In Abgeschiedenheit (Non-Attachment) of 1982, part of a cycle inspired by the writings of the medieval mystic Meister Eckhart, the sound is if anything even more rarefied, more ethereal, though in Wüstenwanderung (Desert Wandering, 1986) based upon Plato and a 17th-century German visionary text, the surfaces are far more troubled and turbulent.

Wanda Landowska's Lost Instruments (1999) takes scraps of music that the great harspichordist played and refracts them as a sequence of chaconne-like variations, alternating between computerised harpsichord and piano. Barn Snail Dance is a quiet chorale-like miniature, while When I Am 84 takes the Beatles' When I'm 64 and turns it into a wispy, whispered lullaby.

It is all exquisite, highly poeticised music that deserves to be heard; Ian Pace's performances are typically indefatigable, just lacking sometimes a bit in tonal variety and imagination."

...fascinating, it's one of those sound-worlds in which you just have to allow yourself to be absorbed and there's much pleasure to be had."

What do you want to know about Beginner's Mind by Walter Zimmerman (two CDs)?