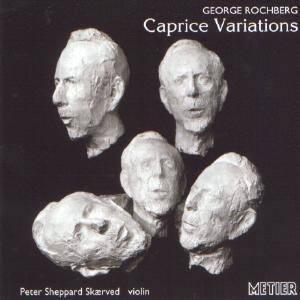 GRAMOPHONE, Peter Dickinson "My first reaction to this CD was the shock of recognition. This was the violin which I remember Ralph Holmes playing, the 'Habeneck', put together by Stradivari in 1734 when he was 90. Its wonderfully rich response makes a major sixth sound like a four-part chord. Peter Sheppard Skærved was a pupil of Holmes and a worth successor, as his playing here and elsewhere demonstrates.

His CD booklet goes into detail about his connections with Rochberg when playing the Caprice Variations, which were written in 1970 shortly before the composer turned away from modernism in works like the Third Quartet. The prospect of 90 minutes of unaccompanied violin is intimidating but, wince Rochberg is working within traditions from Bach to Mahler, the whole apparatus of tonality is in operation for 41 out of 50 variations. There are connections with Beethoven, Brahms and Bach as well as Mahler and early Webern. For example, Variations 21 takes off from the finale of Beethoven's Seventh Symphony, of which Rochberg said: "there is more sheer vitality per square measure... than in any number of pieces by major composers of our own time."

Then there is the Paganini theme itself, which has been the basis for variations by composers as different at Lutoslawski and Andrew lloyd Webber. We hear it briefly at the end and are left wondering if that was what the previous 90 minuets were about. In fact the previous five variations were dissonant but the first 17 were blandly diatonic: 18 was a shock with high shrieks which came back in 35.

Finally, the performance is so compelling that interest never wavers; the recording is fine; and it doesn't matter where the music came from since this magnificent instrument enjoys every note."

Questions from customers about Caprice Variations by George Rochberg

What do you want to know about Caprice Variations by George Rochberg?