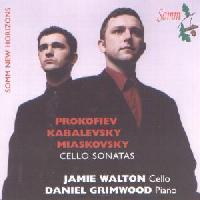 All three works in this collection of sonatas written by composers working under the influence of the Soviet regime were inspired by the great Russian cellist Mstislav Rostropovich.

Jamie Walton is a prize-winning 'cellist who studied with Margaret Moncrieff and Bill Pleeth. Already an established soloist, he has performed as a recitalist worldwide. A recent performance of the Haydn Cello Concerto in C with the Vienna Chamber Orchestra at the Vienne Konzerthaus was rapturously received by both audience and critics.

"There was a rich fluid of absorbing musicianship here; a strength and subtlety that revealed flawless intonation, purity of sound and unfailingly found the music's expressive core." Daily Telegraph.

This recording is part of SOMM NEW HORIZONS, a new series launched in April 2002.

Questions from customers about Cello Sonatas

What do you want to know about Cello Sonatas?