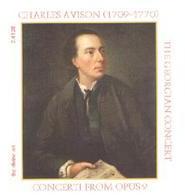 Charles Avison is one of the eighteenth century's forgotten geniuses, and his music deserves much wider recognition. A native of Newcastle upon Tyne (and organist at St. Thomas' Church, Haymarket, for many years) his chamber concerti, written as they were to be performed with or without continuo, are felt by some scholars to be the earliest examples of the modern string quartet. Here 6 of the opus 9 are presented for the first time on authentic instruments by the Georgian Ensemble. Their leader, Simon Jones, is one of England's foremost chamber musicians.

To represent Avison's original vision, the group varies the instrumentation, including chamber organ or harpsichord continuo.

The Georgian Concert . . . have a real feel for this music, lying as it does between the English Baroque concerto and the graceful gestures of the Italianate galant - the pizzicato accompaniment to the aria ending of op.9 no.4 is beautifully done, to cite but one example. The excellent recording, by Ben Turner, was made in the new National Centre for Early Music in York. So, very high marks to both Avison and the Georgian Concert. Can we now have the remaining works from op.9 please?

What do you want to know about Charles Avison Concerti Op.9?