The Choral Music of David Golightly

THE STREETS OF LAREDO

THE BELL IS JINGLING MONOTONOUSLY

OH YOU ARE SO BROAD THE STEPPE

THE SONG OF THE VOLGA HARDWORKERS

ALONG THE STREET THE SNOW IS COMING

THE STEPPE IS ALL AROUND

THE FOG HAS FALLEN

WHAT'S YOUR SONG ABOUT YOU GUIDED BEE?

THE BALLAD OF THE ROBBERS

The Music of David F Golightly, by Alexander Govorov Rites of Passage and Frontiers

David F Golightly's Choral music was the first Western composer's music to become part of Soglasie's repertoire, following the Choir's first meeting with the composer in March 1993. I was greatly interested in his work from the first, particularly as I was familiar with the English style of Elgar, Vaughan Williams, Britten and Tippett. David Golightly's work is indisputably English, but his music also reveals an Englishman with a Russian Soul.

As we rehearsed "Rites of Passage" we were inspired. Working our way towards a better understanding of the choral pieces, we discovered both the composer's love for Pushkin's poetry and the deep sincerity of his talent. The ideas and images of Pushkin's words expressed themselves through the composer's language of music. The great Russian composer, Mussorgsky, said, "Of greatest importance for a composer in creating music is the search for truth". It is this truth we hear when we perform David F Golightly's music.

Our further association with this talented English composer developed into a large scale co-operation, "The St Petersburg Mass ", which was composed for and commissioned by the Soglasie Choir. The premiere of this work in St Petersburg in May 1994 was a major event in the musical life of the city and many important artists and composers attended this unique occasion. Professor Mussin, who is head of Conducting at the St Petersburg Conservatoire, commented that it was "Music of the Heart". and it received a ten-minute standing ovation from an enthusiastic audience.

These are settings with blood coursing through the veins. The choir make a specially telling effect in Shenandoah and they do so without succumbing to the many invitations to sentimentality. Superb stuff ... and my do you hear the Russian bass resonance! The pace of The Streets of Laredo is surprisingly leisurely when compared with the Roy Harris - much more elegiac but with a skip in the step. It works well! The setting of John Hardy is vehemently and grippingly lively. We now leave Golightly for some arrangements of Russian folksongs by Alexander Sveshnikov - a name well known as the great conductor of the reference Melodiya recording of Rachmaninov's Vespers - and by Govorov, Bogdanov, Schwartz and Nikitin. These are shot through with vibrancy. The boozy humour and flighty lightheartedness is carried off to perfection in the triumphantly virtuosic Along the Piterskaya Street with much interplay between the choir and bass Gennadi Martemianov. The melancholy dreaminess of the suave The Bell is Jingling (surely that should be ringing) monotonously makes an unconscious connection with Negro spirituals. The echoes of Russian orthodox chant can be heard in full glory in Oh you are so broad the steppe. The snowdrifts melt is driven by the fast clip-clop of the woodblock. Familiar friends include the Song of the Volga boatmen here rendered as Volga hardworkers. Typically Russian is the lugubrious The steppe is all around with basso profundo Vladimir Chechnev taking the solo. The masculine roughened precision of What's your song about you gilded bee is well worth sampling. The floated gold of Igor Vozny's bel canto tenor is buoyantly sustained above the slow-rung bell evocations of Those evening bells. Kalinka, with its slowings and accelerations, is familiar and a pleasure to hear again. The words for the Golightly songs are printed in full. Each of the folksongs is described in the booklet through a synopsis rather than a full text. They are sung in Russian. All the others on this CD are sung in English. The print may be on the small side but the words of all the songs are printed in the booklet. A pity though that the playing times of each piece and of the whole disc is not given anywhere. The first disc which offered the First Symphony, a work which shows the influence of Shostakovich, was stunningly well-recorded and a CD of the Second Symphony is much anticipated. I hope that we will not have to wait long. Glorious Slav male voices compromised somewhat by distortion when the signal is under pressure of this typically intense Russian singing.

Contact us if you'd like to be notified when The Choral Music of David Golightly is next available. 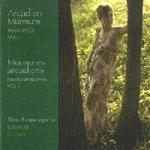 CD of music for solo flute performed by Nina Assimakopoulos

The Christmas Rose is a short contemporary carol setting for SATB. Available as a PDF file under licence £15.00 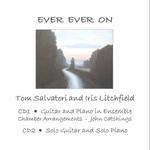 Ever Ever On (Double CD)

A contemporary instrumental album of soothing and melodic music showcasing the all original and timeless piano and guitar compositions of Iris Litchfield and Tom Salvatori with warm and tender arrangements by John Catchings.

Questions from customers about The Choral Music of David Golightly

What do you want to know about The Choral Music of David Golightly?