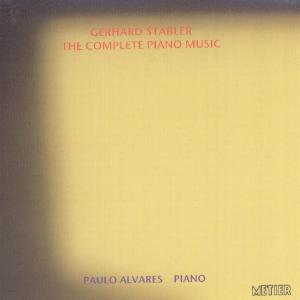 MUSICAL POINTERS, Peter Grahame Woolf "There are similarities and differences in the CDs of Gerhard Stäbler (two for the price of one) submitted for attention later the same week by the British company, Metier. Stäbler considers the piano an instrument for which there is still much to be said. His complete piano music runs to 85 mins, rather similar to the duration of Rihm's Klavierstucke complete. Both composers take a delight in extremes of dynamics, Stäbler's ppppp and fffff in juxtaposition also a reminder of Ustvolskaya's uncompromising way. He likes building clusters, but also allows you to savour long decays and silences, which are excellently recorded, as is Rihm by Kairos. Stabler also explores a wider range of timbres and special effects, and his combinations of keyboard with other sound sources demands virtuosic responses.

But Stäbler is, to my ears, a less tough proposition than Rihm for the ordinary listener. His textures are not so dense, even if the compositional processes remain private to him; in Dali he puts Schubert's sonatas through 'a magical number square' - - . His pieces are very different one from another, their durations too ranging from from 70 secs (Ballad for Times of Raw Forces) to 33 mins (Dali), which makes for a varied programme. Red on Black is graphic and aleatoric, 'improvisatory and calculative'.

There are many cross links, and British connections; Internet 1.1 was written for Ian Pace. In it Paul Alvarez, who speaks inscrutable texts by Walter Benjamin in Stäbler's Dali, plays percussion too and speaks garbled syllables - 'the surrealism of Dali lingers on'. For Internet 1.5 he weaves in peripheral taped sounds and radios. And Internet 1.9 has bizarre vocalisations and Metier's commentator, Dan Albertson, recommends hearing it against 'outside noise or distant conversation' - there's one for the Great Hall of King's College!

Stäbler's little Windows (1983) have passages of 'charm and delicacy', with references to Eisler and Albanian folk music. His Total, inspired by the mid-'80s Miners' Strike in UK, is 'nearly impossible to play' in the 'furious tempo' prescribed, but the Brazilian pianist Paulo Alvarez seems to cope.

I did play the Stäbler CDs straight through and enjoyed doing so. Metier must be congratulated on their plans to continue to profile German contemporary composers, and I can recommend this one to open minded musical explorers. "

Questions from customers about The Complete Piano Music of Gerhard Stäbler

What do you want to know about The Complete Piano Music of Gerhard Stäbler?