Concertos for Guitar, Clarinet and Flute 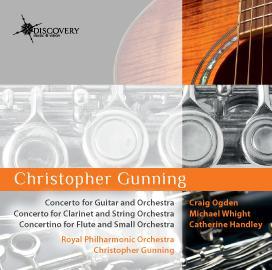 Anyone who has watched Agatha Christie's Poirot on television will have heard the striking opening sequence, the work of Christopher Gunning, who for half a century has followed a career involving such essential if modest music-making. This fine disc brings another side of Gunning's oeuvre in three highly attractive concertanteworks.
The Guitar Concerto was composed specially for Craig Ogden, the brilliant guitarist whose recordings for Virgin/EMI, Chandos, Nimbus, Hyperion, Sony and Classic FM have received wide acclaim, and whose albums "The Guitarist" and "Summertime" shot to the top of the classical charts in 2010 and 2011. Subtitled "Requerdos do Mallorca," the piece is predominantly sunny in character, with an evocative and graceful first movement, a haunting slow movement, and a mostly up-tempo last movement. The subtitle relates to a particularly happy time the composer spent in Mallorca some years ago.

Michael Whight, the principal clarinettist in the Royal Philharmonic Orchestra, is the soloist in the Concerto for Clarinet and String Orchestra. This work, composed in 2006, has a lively first movement, a rather dark middle movement, and an energetic and slightly jazzy finale. Overall, it is rather more "urban" in feeling than the other two concertos, and the composer thinks of it as a "London" piece, the capital city being his home town.

The Concertino for Flute and Small Orchestra was composed for Catherine Handley in 2011 as a result of trips to the Welsh mountains, valleys and villages, where Catherine lives. The outer movements are mostly light and airy, while the central movement is especially quiet and lyrical, a reminder that it is still possible to experience welcome feelings of timelessness among the inspiring Welsh scenery.

Christopher Gunning worked closely with all three soloists, whom he counts as friends. Throughout the CD, the soloists are complimented by superb playing by members of the Royal Philharmonic Orchestra, with whom the composer has worked frequently; his 3rd and 4th Symphonies are also recorded by the RPO for the Chandos label, coupled with his Concerto for Oboe and Strings, his daughter Verity Gunning playing the solo part.

"With the composer an ardent conductor inspiring compelling performances of all three works, it is an admirable disc to show off Christopher Gunning's still under-appreciated gifts."
Gramophone Edward Greenfield

Questions from customers about Concertos for Guitar, Clarinet and Flute

What do you want to know about Concertos for Guitar, Clarinet and Flute ?