Ever Ever On (Double CD) 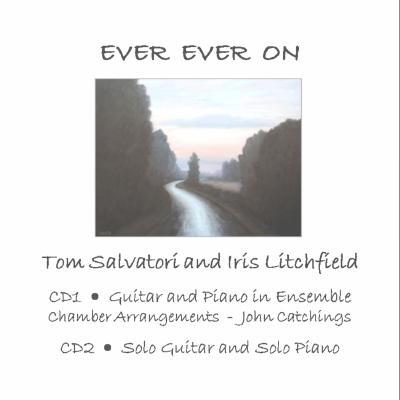 1. You're With Me Still (Litchfield)

2. The Ghosts of Levigliani (Salvatori)

7. Fly with the Wind (Litchfield)

9. To You With Love (Litchfield)

10.As the Nightshade Grows (Salvatori)

"Ever Ever On is the anxiously-awaited new album from Tom Salvatori and Iris Litchfield, following their award-winning 2007 release When Evening Falls. This new release is a 2-CD set with one disc featuring solo versions of each of the twelve pieces and the other featuring ensemble versions of the same twelve songs. The ensemble CD is not just a rerecording with someone playing keyboard instrumentation - these are live chamber musicians playing additional parts lovingly created by John Catchings in Nashville. The sound quality is stellar! The CDs alternate between piano pieces composed by Iris Litchfield, a classically-trained pianist and retired math teacher from England, and acoustic guitar pieces by Tom Salvatori, a classically-trained American guitarist. John Catchings appears with his soulful cello on all of the ensemble tracks. The rest of the chamber group includes violins and viola, bass, oboe, and French horn.

The music itself is classically-styled with a contemporary attitude - gorgeous and heartfelt. Ever Ever On is certain to be on my Favorites list for the year! Give your ears and your mind a real treat and check this one out! It is available from Amazon and CD Baby. I give it my highest recommendation!"

Questions from customers about Ever Ever On (Double CD)

What do you want to know about Ever Ever On (Double CD)?