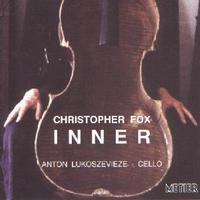 METIER's third CD dedicated to the "impressive, thoughtful, entertaining and extremely varied" [Sunday Times] music of Christopher Fox. Performed exclusively by cellist Anton Lukoszevieze, the disc features the 45 minute long inner, written for him in 2000. The background to the piece is described by the composer:

Since 1997 Anton Lukoszevieze has performed a number of my works - the piano quartet Memento, chant suspendu and Straight lines in broken times3 and the string trio skin. All these works are relatively short however and in 1999 we began to talk about a work on a more ambitious time scale, inner. I also wanted to create a work which is not bound to the concert hall or to concert-style presentation, which can through the simplicity of its technical requirements and its duration create its own context in many different spaces. I am fascinated by the intimacy of the relationship between an audience and a solo performer, whether that solo performer be a musician, stand-up comedian or a storyteller. It seems to me that any extended solo performance involves the establishment of a sense of time and expectation, of a bond of trust, out of which the dynamic of the performance evolves., I wanted to create that sort of engagement between Anton and his audience, to establish a sense of a musical narrative within which there's time for introductions, explanations, digressions, some space for surprises and varying degrees of attentiveness and, at the end, a feeling of appropriate conclusions being reached.

Generic Compositions #3, 4 and 5 are pieces for solo instruments of generic similarity - for any plucked instrument, for any bowed instrument and any sliding instrument respectively. The pieces from the set of seven may be played individually, in combinations with other parts of Everything You Need to Know - the ensemble installation written for the Ives Ensemble for which the Generic Compositions were written - or superimposed one of another, as has been achieved on this recording.

This fascinating disc is superbly performed by Lukoszevieze, director of the ensemble Apartment House, whose presentations of avant-garde, experimental and improvised music are renowned world-wide. chant suspendu Generic Compositions #3, #4, and #5 inner

Questions from customers about Inner

What do you want to know about Inner?