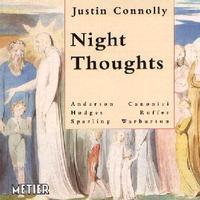 The first CD dedicated to the music of Justin Connolly performed by Nicolas Hodges and others, all of whom are closely associated with the composer.

All the pieces are explorations of darkness, much as in the poem "Night Thoughts" by Edward Young (first pub. 1745). The Sonatina No.2 is in 9 parts, an ennead, like Young's poem. The Sonatina was almost given the same name until the composer recollected Copland having got there before him. Nocturnal is a set of sea-pictures in which the song of wind and wave is played out against a background of sea-sounds: the creaking of canvas and cordage, the mysterious calls of unseen birds. Tesserae F is another night-piece, whose subtitle, Domination in Black, comes from a poem by Wallace Stevens. While Scardanelli Dreams charts the motions of a great spirit, which, though affected by adversity and illness, is not dimmed, but rather illuminates the darkness in which it finds itself.

"JUSTIN CONNOLLY has never quite achieved the prominence that, 35 years ago, many thought he would. The turning of the tide against the modernist way, rather than any lapse in the quality of his output, saw to that. This disc sets to redress the balance. It contains four substantial and varied chamber pieces, opening with the Sonatina No 2: Ennead for piano, Op 26, written last year. The work is statuesque, and, as with all Connolly, organic. Nicholas Hodges plays it brilliantly. Here and in the other pieces - Nocturnal, Op 33, a marine tribute to the poet Edward Shipley, the solo bass clarinet piece Tesserae F: Domination of Black Op 15f, and the Hölderlin cantata Scardanelli Dreams Op 37, for mezzo and piano - Connolly's manner is vividly gestural, beautifully coloured, and compellingly fluid." Stephen Pettit, The Sunday Times>

What do you want to know about Justin Connolly - Night Thoughts?