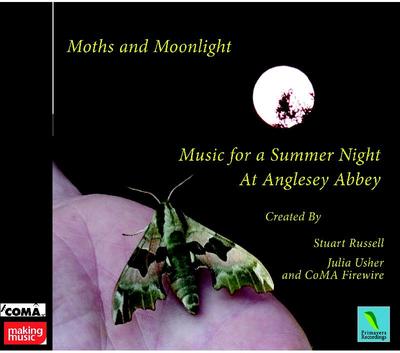 Two haunting disks of moonlit atmosphere, vividly evoking the nocturnal world of moths. The first disk is Stuart Russell's magnificent Moon Symphony, "The Radiant Moon", captured in four ambient electronic sequences. Disk two introduces CoMA FIREWIRE, creating music for a summer night which was first streamed through the gardens of Anglesey Abbey near Cambridge, in June 2010. Both these works were commissioned by Making Music Eastern and the National Trust at Anglesey Abbey.

This exciting commission was realised in different ways: Stuart Russell synthesised the sounds he wished to create, and built up a complex and dramatic night journey, that follows the rise and fall of the moon, with great power and imagination; leading to the first glimmers of dawn and the dawn chorus. This symphonic work was streamed through the gardens of Anglesey Abbey near Cambridge on June 26th, as part of a twilight family workshop.

in collaboration, Colchester composer Julia Usher worked with Stuart Russell to record a series of free improvisations on images and themes relating to "The Secret Life of Moths". Julia then took this extensive material and edited and processed the improvisations into 12 tracks, which were then used during the family workshops. 100 participants of every age group were encouraged (during three workshops) to interact with the streamed music created by Firewire and by Julia Usher herself, in moth-movement, and making surprising sounds using recycled materials: bubble wrap, cardboard tubes, plastic containers, and more. The old Flour Mill at Anglesey Abbey became a giant percussion instrument, as children only were allowed to enter under supervision, and "sound" the whole building.

The music perfectly complemented the extraordinary setting of the gardens at night. All the participants stayed up very late indeed, to meet the real life Secret Life of Moths, observing the moths that gathered in their thousands, attracted by enormous light screens, under a full yellow moon.

Questions from customers about Moths and Moonlight

What do you want to know about Moths and Moonlight?