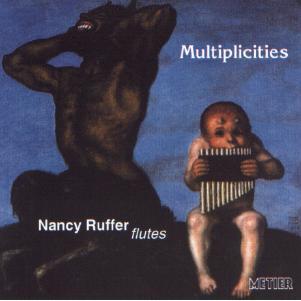 Long awaited solo recital CD from the virtuoso flautist Nancy Ruffer. Since she arrived in London on a Fulbright-Hays Scholarship in the early 1980s, Nancy has been at the forefront of contemporary flute interpretation, giving numerous first performances - including the UK premiere of Ferneyhough's Superscriptio at the QEH - and commissioning new works from composers such as Chris Dench, Michael Finnissy and others.

The Sunday Times, Paul Driver
"The title of this collection aside, there is a certain singularity to the genre. It is a real composer's test to write a flute solo that stands out from the rest. Debussy's Syrinx is the supreme example, but Ferneyhough's Superscriptio, for piccolo, a propulsive altitudinal scrabbling, is unmistakable. Memorable, too, are the fireworks of James Dillon's Diffraction, also for piccolo, which puts a low note of highest instrument to ingenious use. Chris Dench's beautifully titled Caught Breath of Time is eloquent; Simon Holt's Maïastra has a catchily repetitive ending. Ruffer's playing is fastidious, impassioned and silver-tongued throughout." **

MusicWeb, Neil Horner
"An ambitious survey of late twentieth century pieces for solo flute. ...Nancy Ruffer has succeeded very well in putting together a diverse programme of the challenging and the more accessible, while including several works commissioned by or dedicated to her. ...This disc will no doubt be essential listening for flautists engaged with the contemporary music scene. The performances are as authoritative as it gets!"

Questions from customers about Multiplicities

What do you want to know about Multiplicities?