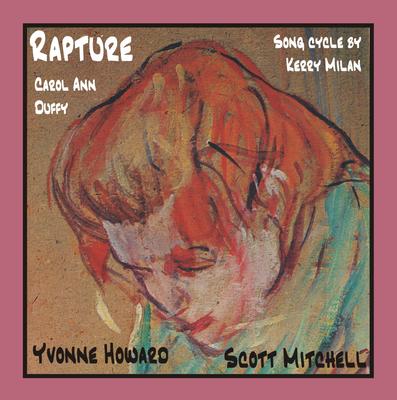 Settings of 20 of the 52 poems that make up Carol Ann Duffy's 2005 award-winning Rapture collection which so movingly chronicles the sometimes turbulent course of a couple's personal relationship.

This Download is part one of two and has the first ten settings:
You, Forest, River, Hour, If I was dead, Rapture, Elegy, Row, Fall and Give.

The music, which uses serial technique throughout (but think Berg rather than Schoenberg) and with three settings calling for sprechgesang, presents challenges for the singer, the pianist and also for the listener; but this moving recording and the spellbound audience response following the work's première in Stafford recently,* clearly illustrate just how rewarding such seemingly demanding experiences can be.

* "The selected order of poems followed in a sensical way, each appearing to blend with the one before it. Carol Ann Duffy's poems have often appeared lyrical to me and to hear them performed in such a manner was a real eye opener in the very best sense. Just a few of the poems in the cycle are: River, Row, Give, Grief, Night Marriage and one of my personal favourites, The Love Poem. Kerry Milan has composed an exquisitely fitting tribute to the penmanship of one of Stafford's most celebrated writers and in doing so he's gained a new fan…. me! " Helen McWilliams, Entertainment Views

Please email ardrosshouse@btinternet.com for a pdf version of the CD booklet which has the background to the work and the text.

Questions from customers about Rapture Song Cycle - part 1 of 2

What do you want to know about Rapture Song Cycle - part 1 of 2?