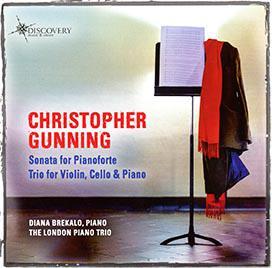 Most of award-winning composer Christopher Gunning's work has been for orchestra, but he has always wanted to write a work for solo piano. "So when Diana Brekalo came along, having impressed me with performances of contemporary music as well as Prokofiev and Rachmaninov, I leapt at the opportunity to write something which would explore her extraordinary technique and musicianship," he says. Diana premiered this work in a concert at a church in Notting Hill Gate in March 2015, and it receives its premiere recording here. The album also includes a Piano Trio commissioned by the London Piano Trio in early 2014.

"A little short on playing-time, but big on musical interest, this new CD of music by the highly gifted Christopher Gunning couples what may well be his two most significant chamber musical works in performances of considerable compulsion. Better-known for his orchestral music, including a growing and unjustly-neglected series of major symphonic works, together with a clutch of fine concertos, Gunning may be best known of all for his tv and film music - but that is bread-and-butter work, such as Bach, Mozart and Haydn would cheerfully have undertaken - and did.   Gunning's serious works leave one in no doubt that he is a genuine composer of impressive art music - not from some arcane area of academe, or God-knows-where outside of real life - because Gunning's wide practical experience and his immaculate provenance of studies and achievements have combined to find him, at the height of his maturity and in full creative flood, a truly splendid composer - as 'English' as the day is long, perhaps, but no more than, say, Rubbra or Richard Rodney Bennett (both being Gunning's teachers) - in full command of his craft and of his material.   "
Robert Matthew-Walker

Questions from customers about Sonata for Pianoforte. Trio for Violin, Cello & Piano

What do you want to know about Sonata for Pianoforte. Trio for Violin, Cello & Piano?