The Songs and Part-Songs of Percy Turnbull 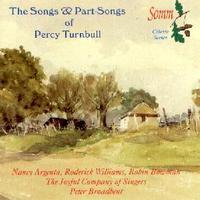 This is the second of SOMM's CDs of the music of Percy Turnbull. The first, released in 2000 consisted of the composer's piano music, performed by Peter Jacobs.

Turnbull was born in Newcastle in 1902 and trained as a chorister while at the same time taking piano lessons from Sigmund Oppenheimer. He won a Foundation Scholarship to the Royal College of Music in London where he studied composition with Holst, Vaughan Williams and John Ireland. Among his student contemporaries were composers Tippett, Armstrong, Maconchy and Rubbra.

Turnbull was drawn to the music of Faure and Ravel and his music has a fragility and lightness of touch reminiscent of the French School of that time. Most of the songs and part-songs were written during his 20s. Written with simplicity and clear straightforward diatonicism, there is much scope in the music for humour and satire.

Soprano, Nancy Argenta has contributed to over 40 recordings of works by composers as diverse as Mahler, Schubert and Schoenberg. Roderick Williams, baritone, is widely recognised for his performances in opera houses across the UK and Europe. He is also a major recording artist and composer whose works have been premiered in London and heard on national radio. Robin Bowman, piano, is also Head of Vocal Studies at the Guildhall School of Music and Drama. The Joyful Company of Singers, under their directcor, Peter Broadbent, has long been established as one of Europe's leading chamber choirs.

What do you want to know about The Songs and Part-Songs of Percy Turnbull?