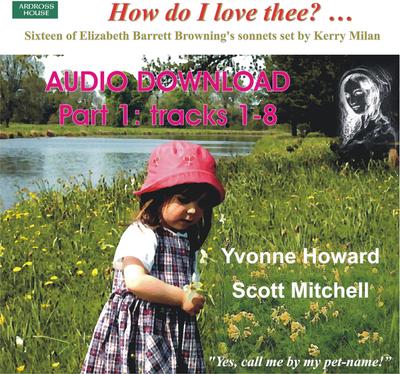 Elizabeth Barrett wrote 44 love sonnets in secret during the 20 months prior to her marriage and 'elopement' with Robert Browning. He saw them 3 years later, describing them as "the finest Sonnets written in any language since Shakespeare's".

"Sonnets from the Portuguese" (the couple's own misleading title) sets a third of the sonnets, starting with the first and finishing with number 43, with its glorious climax "How do I love thee? Let me count the ways."

The sonnets faithfully chronicle Elizabeth's emotions through the 20 months of courtship, from the first of their 574 letters in January 1845 up to those dramatic days of September 1846.

At over 40 minutes, this is a substantial work which hopefully manages to capture faithfully the various changing moods and emotions of a remarkable woman. The song cycle is dedicated to the wonderful British mezzo, Yvonne Howard, whose characterisation is second to none, and for whom the work was conceived.

The work is for mezzo-soprano and pianoforte and for convenience the sonnets are split into two books, each of eight settings.

Full details, including the text and a commentary, can be found at www.ardrosshouse.com/sonnets/ .

The audio downloads are similarly divided into two halves.

What do you want to know about Sonnets from the Portuguese for mezzo -audio download 1 (8 settings)?