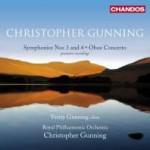 Here the Royal Philharmonic Orchestra performs the premiere recording of Symphonies No. 3 and No. 4, coupled with Concerto for Oboe and String Orchestra. Symphony No. 3 was composed in the aftermath of a turbulent 2005. The work is an expression of this anxiety and the result is a chaotic, colourful musical landscape inspired by the Welsh countryside to which he escaped. While Symphony No. 3 is predominantly turbulent, Symphony No. 4 offers a different view of Gunning's world. Here the listener is treated to a sense of triumph over adversity, and herein the work is more direct and tonal. Concerto for Oboe and String Orchestra was composed as a Christmas present for his daughter Verity, who here performs her Concerto. Middle Eastern influences are evident in the central movement for it was composed on the day which Palestinian leader Yasser Arafat died and reflects Gunning's sense of sorrow for the region.

The works are conducted by the composer, and thus can be considered definitive performances.

Questions from customers about Symphonies 3 and 4. Oboe Concerto

What do you want to know about Symphonies 3 and 4. Oboe Concerto?