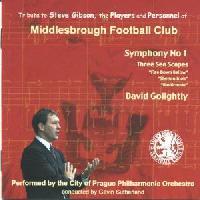 CD of orchestral music by David Golightly performed by the City of Prague Philharmonic. Orchestra

"For those who strive, knock hard on the door of fate"

"Follow the path of the visionaries, theirs is the way of the light"

"There are no defeats, only gifts of wisdom"

"Seek ye the grail of life"

This extraordinarily powerful work was written for the Middlesbrough Football Club and has been adopted as their Anthem. Also on the CD are David Golightly's Three Seascapes.

The Prague Philharmonic Orchestra is conducted by Gavin Sutherland

It may seem extraordinary, but David Golightly's Symphony No 1, written over a period of four years, was commissioned and dedicated to Middlesbrough Football Team and its Chairman, Steve Gibson. Essentially programmatic, it is effectively wrought with a first movement founded on a rhythmic ostinato (Resoluto marcato) "for those who strive, knock hard on the door of fate", the scherzo reflecting the lively optimism of visits to Wembley, the eloquent and imaginatively scored slow movement reflecting the pain of defeat in an idiom that reminded the writer a little of the spacious string writing of Howard Hanson. The finale is a jaunty populist march, exotically scored with the two-part structure reflecting the two halves of the game. The orchestral fanfares depict the team scoring. It is a happy extrovert inspiration and receives a fine performance under Gavin Sutherland in Prague and a full-blooded recording. The three Seascapes further demonstrate Golightly's vivid orchestral skill, using well-known folk-themes, like Shenandoah. The disc is available from Modrana Music Publishers Limited.

Questions from customers about Symphony No.1

What do you want to know about Symphony No.1?