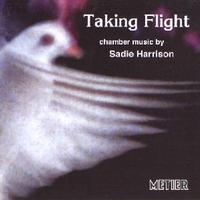 To judge from these chamber works, the Australian-born composer Sadie Harrison has an original imagination that expresses itself in a fluent, thoughtfully poetic language. The 20-minute string quartet Taking Flight (1999), played with poise by the Kreutzer, is a delicate labyrinth of sound echoing the psychological journey, Harrison says, of Bartok's Bluebeard's Castle, though much less darkly. Indeed, there's real sensitivity to her music, for all its rigour, Traceries (1997), for violin (Peter Sheppard Skærved) and piano (Aaron Shorr), evokes the imagery of gothic architecture; Arcosolia (1999) plays on the meaning of its title, which refers to a medieval burial place; and Aster (1995), six short classical Greek texts sung by Lesley-Jane rogers with flute and Strings, makes thoughtful reference to the passing of time and the fatalistic nature of love. Stephen Pettit, The Sunday Times

This is said to be the first recording devoted to music by Sadie Harrison, and it shows her to have a compelling, distinctive, and passionate compositional voice. The disc features chamber music, including works for string quartet, violin and piano, solo piano, and soprano, flute and string trio. Sadie Harrison was born in Australia in 1965, but studied at the University of Surrey, and later Kings College, London. She is currently a lecturer in composition and contemporary music at Goldsmiths College, The performances on this disc are generally very good, and the recorded sound excellent For those who feel that contemporary music often lacks heart, but who are also uncomfortable with a return to overtly tonal structures, this disc is definitely worth exploring. Classical London - Disc of the Month

Questions from customers about Taking Flight

What do you want to know about Taking Flight?