A Day In The Life of Squirrel - Squirrel Song - download 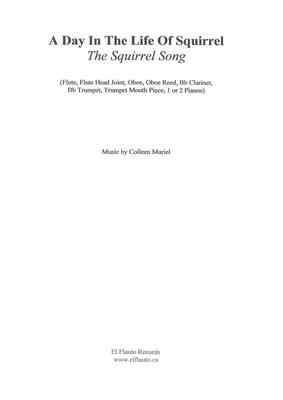 A fun but very hard to play piece for a small group of chamber instruments. The Scoring is -

The Order of Movements which describes the music is -

One or Two Pianos

When using only one piano it is advisable to have two players; one for the strings and one for the keyboard. In movements which utilize both pianos (if using only 1 piano) please use the pedal markings for piano 2.

The piano glissandos on it's strings with fingers creating an ethereal quality.

A string can be blocked with one hand, while the other hand plays the same note on the piano keyboard, creating a Chinese bloc sound (a stopped sound)

The pianist can use any or all of the large open areas of strings in different sections of the piano. Even though the notated arrows in the score seem to indicate playing directly up or down the piano strings - this simply depicts the range to utilize. Please spend time in the middle range of the strings as well as playing frequently in a circular motion on the strings. Discretion of pianist.

There perhaps should be some fluctuations in the dynamics of the piano strings gissando to fit in with other simultaneous music. Generally speaking however the piano glissando shoud stay predominantly around an 'mp' dynamic.

To facilitate some of the music

Where there are no bar lines accidentals only apply to the note they directly precede.

Tremoli are not necessarily meant to be clear. If they sound distorted that's GREAT. Remember this piece of music is about a Squirrel.

For example 1:5 would mean the fifth footnote from the first movement. This is done consistenty throughout.

This composer thinks it would also be great fun to play individual movements as individual pieces.

She also believes it would be OK to perform 2 or 3 movements (musician's choice) rather than the whole of Squirrel Song (when needed).

What do you want to know about A Day In The Life of Squirrel - Squirrel Song?