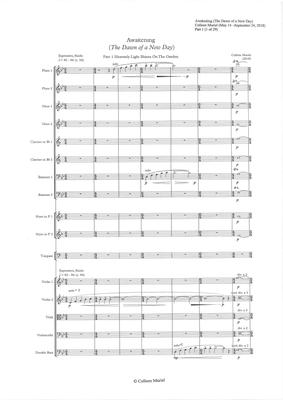 Awakening (The Dawn of a New Day) is an orchestra piece written by Colleen Muriel between May 14 and September 24, 2018 (with a few notes added through to December 6, 2018). It is approximately 7 minutes in length and has 5 main parts (sections/movements)

There are subtitles throught which describe various aspects of dawns, awakenings, struggles to be born or give birth and/or awareness. These are as follows:

Part 2 - Thunder was Heard in the Whirlwind

Part 3 - The Sea is Stirred

Part 4 - Reflections on the Stirring, The Waves Roar, The Face of the Deep and The Wilderness Shakes

Part 5 - New Every Morning (Heavenly Light Shines on the Garden)

Parts 1 and 5 are very similar in nature utilizing a small melodic fragment which is played often quietly by various instruments as a solo. By contrast parts 2 and 4 are often very intense, with full orchestra and rhythmical use of dissonance.

Some sections also make use of a mix of a type of alberti bass figure and melodic material.

Awakening uses traditional notation and is more or less tonal in nature with some moments of intense dissonances and many moments of harmony.

I must confess the idea to write an orchestra piece did not come from me: it came from a dear friend of mine named Winifred Hall who had already commissioned two pieces of music from me. These pieces were Indigo (a suite for piano) and Invisible (a chamber work for mezzo-soprano, tenor, piano and piano strings). She kept asking me for an orchestra piece. Finally in January 2017 I agreed to write an orchestra piece for her. When I said this I had absolutely no idea if this would get done or if I could find any orchestra anywhere that would consider a play through so I could hear how it sounds.

Then one day a few months later I met Susan Pluthero, a cellist in the U3A Orchestra. She was stewarding ABRSM Exams and we started to chat. During the course of our conversation I mentioned the orchestra piece and she suggested I contact the conductor of the orchestra she played in.

The next day I contacted the conductor - Mr. Rupert Bond. He was very supportive of my composition and offered to include it in their orchestra workshop in February, 2019. This was/is very exciting for me and so the story continues.

I would like to thank Angela Ayton for educating me about the percussion section of orchestras; especially the Timpani.

Questions from customers about Awakening

What do you want to know about Awakening?