See a page from Banquet 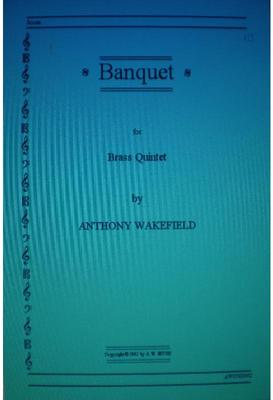 To be a fly on the wall in one of England's impenetrable castles, and to witness the feasting in one of the great banqueting halls of times past. The huge and busy kitchens, as hot and sticky as one could bear; everyone running to and fro; the boiling kettles and fat, sometimes spilling onto lowly cooks and waiting staff. The smell of the burning of spit fires, and the sweat and toil of panic-ridden staff; the preparation of dozens of herbs and spices all combining to make it almost impossible to take in fresh breaths of air. The wine suppliers praying that the year's vintage is a palatable one, and being expected to make the first tasting, then make their somewhat staggered and terrifying approach up to monarch, with bottle and goblet upon silver tray. ENJOY YOUR MEAL SIR!

His compositions have brought him awards in 1996 and 1997 from the Clarinet and Saxophone Society of Great Britain. He composed the title music for "The Battle for the Falklands" video, produced in 1982 by Granada/ITN.

As an arranger/orchestrator, his work has taken him into the recording studio and concert hall with the London Symphony Orchestra, Royal Philharmonic Orchestra and the BBC Concert and Radio Orchestras. He is also in demand as an arranger and composer for the brass band world, his works having been recorded by Brighouse and Rastrick - their CD of Carols being a favourite during the Christmas season. Williams Fairey, and BTM Band, S. Wales have also recorded to CD original scores.

Commissions have also been performed at the International Clarinet Association - 2005 and Oklahoma Clarinet Convention 2006.

Questions from customers about Banquet

What do you want to know about Banquet?