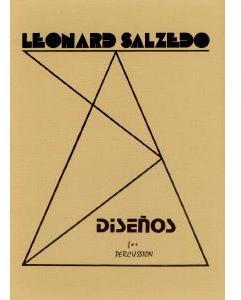 Diseños is the Spanish for design. The pieces have been designed to exploit all the possibilities in writing for a group of percussion instruments.

Leonard Salzedo (1921 - 2000) was born in London of Spanish/Jewish descent. He studied at the Royal College of Music where he won the Cobbett Prize for his First String Quartet and was commissioned to write his first ballet The Fugitive. He played violin in the London Philharmonic Orchestra, the Royal Philharmonic Orchestra and the London Soloists Ensemble. In 1967 he gave up playing the violin to become Musical Director of Ballet Rambert (now Rambert Dance Company). In the 1970s he was principal conductor with the Scottish Ballet, and in the 1980sMusic Director of London City Ballet. After 1986 he devoted himself full-time to composition, and wrote prolifically until 1997.

In spite of continuous activities as a performer he wrote more than 160 compositions including 10 string quartets, two symphonies, 17 ballets, and many pieces for strings brass, wind, percussion, voice, and combinations of these. This comprises a vast musically diverse legacy of works which bespeak his love of his craft and an insider's knowledge of the orchestra and its various instruments.

To Ullapool and beyond

Questions from customers about Disenos for 6 Percussion

What do you want to know about Disenos for 6 Percussion?