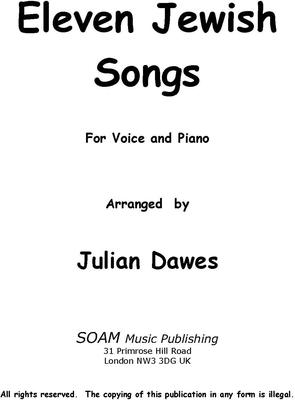 This setting of Jewish Songs was suggested to the composer by Ruti Halvani who has been especially interested in encouraging Jewish composers in this area of work. In much the same way that Benjamin Britten arranged English Folk Songs in his own style and thereby made the material into art songs, so Julian Dawes has done similarly with these songs.

Traditional song.Words from the prayer - Our father, our King, be gracious unto us and answer us, for lo we are unworthy; Deal with us in charity and loving kindness and save us.

Folksong - words by Rabbi Shalom Shabazi.Beautiful city, faithful to your kings and your ministers.

Oriental folksong.The time for love has come, my bride; come to my garden, the vine is blooming and the pomegranate is budding.

If I safeguard the Sabbath, God will safeguard me.It is a sign forever between him and me.

A song for the Sabbath.We bless God for giving food and wine.

He shall proclaim freedom for all and protect you.Rest and be contented on the Sabbath day.

'And it shall come to pass at midnight' tells of wondrous deeds God perfoirmed to save the Jews.It ends with: 'Bring near the hour which is neither day or night.Highest one, make known that thine is the day, and also the night'.

Words by Yehuda Karni - 1884-1949.In the late 1930's a renowned Israeli singer, who was then collecting songs and melodies, asked Yeuda Karni to write words to this song she had found.It tells of a longing for a distant place, and oasis, where I could fly and count the stars.

Words by David Shimoni - 1856-1966, who immigrated to Palestine from Russia and won Israel's most prestigious prize for literature.The music is of folk origin from Bucharia.It tells the story of a wanderijng Jew looking for a place of safety - resembling a bird that is looking for a nest.

11.H'acnisini Takhat Kenafech
Words by H.N. Bialik;An Eastern European Folksong.Where is my youth?What is love?I have nothing left in the world - take me under your wing and be my shelter, a resting place for my prayers.

Four Songs From The Book Of Solomon
(printed sheet music)

What do you want to know about Eleven Jewish Songs?