See a page from Hauntings 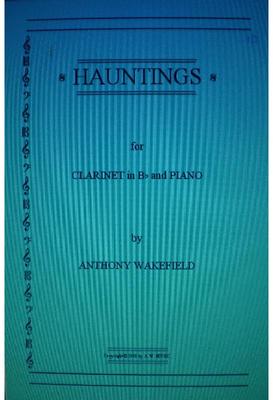 Hauntings was chosen as one of three test pieces in a worldwide internet clarinet performance competition held during the summer of 2001.

A sonatina in essence, it essentially combines and mixes the harmonic structures of neo-classicism with the abrasiveness of late 20th century 'untutored rock' sounds. Listen for the major 9th chord without the 3rd, particularly in the 2nd movement. A composition nevertheless where one can recognize the 'tunes'.

"An enjoyable piece to play, with even the difficult bits falling happily under the fingers, as one would expect from a composer who is also a clarinettist".
Gordon Lewin - Clarinet and Saxophone, Winter 2000

Recorded in 2008 by Leslie Craven, principal clarinet, Orchestra of the Welsh National Opera.

His compositions have brought him awards in 1996 and 1997 from the Clarinet and Saxophone Society of Great Britain.

He composed the title music for "The Battle for the Falklands" video, produced in 1982 by Granada/ITN.

As an arranger/orchestrator, his work has taken him into the recording studio and concert hall with the London Symphony Orchestra, Royal Philharmonic Orchestra and the BBC Concert and Radio Orchestras. He is also in demand as an arranger and composer for the brass band world, his works having been recorded by Brighouse and Rastrick, the Carols of which are a great favourite during the Christmas celebrations. Williams Fairey and the BTM Band, S. Wales have also committed to CD original works.

Questions from customers about Hauntings

What do you want to know about Hauntings?