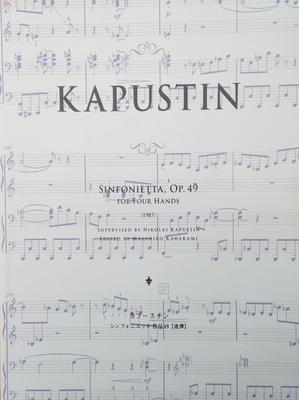 This piece should really have been designated opus 49a, because it is merely a four hand piano arrangement of Kapustin's orchestral Sinfonietta Op. 49 (with the same name). Both versions were composed in 1986, with the piano version serving a purely pragmatic purpose: to be performed at the USSR Ministry of Culture in front of a commission composed of distinguished Soviet composers and musicologists.

"After a performance by me and a female friend of mine, one of the members of the commission remarked that Kapustin created a hybrid of Rossini and Russian folklore. Well, such a hybrid is hardly new: Igor Stravinsky once said that Mikhail Glinka is the "Russian Rossini." Curiously, the original title of this work, "Divertimento," was deemed too frivolous by a Ministry employee who also suggested its present name. At the time I thought that this arrangement was for a one-time use only, but this did not turn out to be the case: first Japanese pianists began to perform it, and then others. Of course, these four pieces could have been arranged in a more inventive (and as a result, more complex) manner. As it is, its texture is quite modest from a pianist's point of view, for obvious reasons. Perhaps it is for the better, since my piano music, as a rule, is technically very difficult (with a few exceptions).

As for the performance, I would like to draw attention to a few things. In the first movement, the secondo part contains multiple chords repeating at a rapid pace which should be played as lightly as possible (leggiero). On the other hand, the first occurrence of the main theme of this movement (which is also in secondo) must be played "a voce piena" (the theme is then picked up by primo). At cue number two of the second movement it is desirable to imitate the sound of a chorus of saxophones and play molto legato in the swing style."

Judy asks: Is there cello/piano piece by kapustin
Sarah Rodgers answered:Yes, we have several pieces for cello by Kapustin. You will find them at this link - https://www.tutti.co.uk/search?q=kapustin+cello

Volker asks: How difficult is the grade "Difficulty 9"?
Sarah Rodgers answered:This is a level beyond that of a student - a professional recital level although not technically the most difficult.

What do you want to know about Kapustin Sinfonietta op 49?