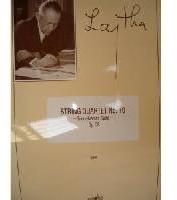 Lajtha (pronounced "Loy-tah") was a contemporary of Bartók and shared his interest in collecting Hungarian folk music. Folk idoms pervade Lajtha's compositions, and as the title Transylvanian Suite suggests, his string quartet number 10 is no exception: all three movements of the quartet draw richly from folk melodies.

Lajtha's music was suppressed during his lifetime by the communist regime. Upon his return in 1947 from a spending a year in London writing music for the film of T. S. Eliot's play Murder in the Cathedral, the Hungarian authorities confiscated his passport for overstaying in the west and stripped him of all official positions. From then he lived under constant harassment from the state security services. Despite this, his creativity was never crushed. As he wrote to one of his sons in 1950: "I have in my soul a secret room of my own. It has nothing to do with reality, yet it is more real".

WIth his music repressed by the authorities at home and unable to travel to the west to perform his music, he never gained mainstream recognition. It is only recently that Lajtha has started to be recognized alongside Bartók and Kodály as one of the most important voices of 20th century Hungarian music.

An obscure but fascinating chamber music work, that will enchant both listeners and performers.

What do you want to know about String Quartet No 10 op 58 (Transylvanian Suite)?