See a page from Music for Piano

See a page from Music for Piano 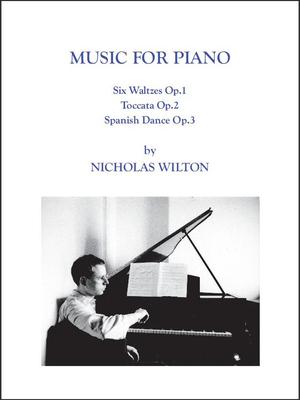 "Wilton's piano music is charming and delightful...There's no mistaking Chopin as an influence for Wilton's Op.1, a set of six waltzes. What makes these pieces stand on their own two feet is as ability to touch as well as charm: their musical nostalgia, a kind of Rückblick, is beautifully effective."

As a composer, Nicholas Wilton is best known for his sacred choral music
which he began writing in the late 1980s, having previously composed
mainly for the piano. The eight short pieces for piano, published here for
the first time, were written between 1987 and 1989. As with his sacred
choral music, these pieces show the influence of composers whom he
most admired at the time: principally Chopin and Mozart but also
Scarlatti, Strauss, Beethoven, Shostakovich and Rodrigo. Whilst these
pieces are very much his own, Wilton was never shy of paying tribute to
the masters from whom he had learned his craft.

A CD of the eight miniatures, Music for Piano, played by Alexei Knupffer,
was released in 2015. The recording was well received; Fanfare described
the music as "fascinating" and "impeccably championed by the evidently
highly musical pianist, Alexei Knupffer". Musical Opinionsaid Wilton's
compositions exhibited "charming innocence" and "consummate expertise".
Ars Pulchra Magazine wrote: "In addition to Wilton's absolute mastery
of form in the six waltzes, there is an extra dimension of intellective
finesse and transcendent emotion… Listeners will quickly realize that
this musical doffing of the hat to the introspective composer of the Hôtel
Lambert is a springboard of ascent… This breath-of-fresh-air… release
rises to the starry heights of classic English composition, but on wings
possessed by very few, to speak of Mr. Wilton's loving apprenticeship to
the past and his magisterial sense of beauty."

Questions from customers about Music for Piano

Items related to Music for Piano

What do you want to know about Music for Piano?