See a page from Night Voyage 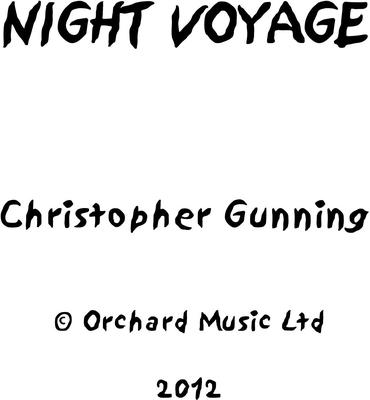 "I have always been drawn to the sea, and "Night Voyage" is very definitely a sea piece. It was born on a winter's evening as I stood by the Mersey river in Liverpool; to the West, a patch of orange lit the darkening sky, seabirds called mournfully, and I watched a large grey freighter slipping majestically out to sea. Where was it heading and what would befall it? My ship takes an imaginary journey; first there is the optimism of a new adventure, but soon we meet a violent storm. As the storm subsides land is sighted and we arrive safely at dawn, battered and bruised, but intact - if chastened. There are obvious parallels with life here; this is really a tone-poem depicting a journey through an emotional crisis to a resolution of a sort."
Christopher Gunning

"Night Voyage is a much shorter tone poem, 12 minutes or so; it inhabits, as one might expect, a similar textural approach, faintly Impressionistic, but always underpinned by a genuine sense of inner tonal (rather than harmonic) basis. It is brilliantly and masterly orchestrated, so that any young composer could learn a lot from this work. It is direct in expression, but never simple: the wonderfully imaginative extended closing pages in particular bring the work to a quiet and solemn end."

Christopher Gunning : Symphony no 6; Night Voyage, for orchestra; Symphony no 7, conducted by the composer

Full score, orchestral work in 4 movements, approx 51 minutes. Recorded by by the Royal Philharmonic Ochestra conducted by the composer. DMV105

Questions from customers about Night Voyage

What do you want to know about Night Voyage ?