See a page from Nine-Pointed Star 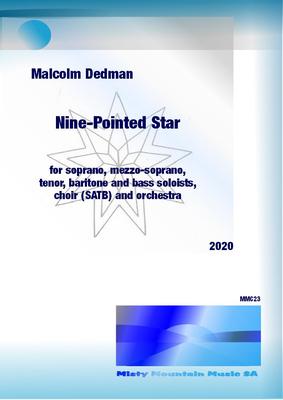 This oratorio, written in 2019 and completed in 2020, is for five soloists (soprano, mezzo-soprano, tenor, baritone and bass), mixed choir and orchestra. Its twelve movements are divided into three parts with four movements each. In total, its duration is approximately one hour and forty-five minutes.

The oratorio shows the progress of religion from Hindu to Bahá'í. The Bahá'í Faith claims that all true religion is one, so the composer has selected texts to show not only the similarities in the teachings of the major religions, but also to show that religious teaching is progressive, hence 'progressive revelation'. It is, unfortunately, people of the different Faiths that have caused division through misunderstanding and incorrect or misleading translations. It is the composer's wish that these texts will bring about greater understanding of religious Faith in general.

The major teachers ('Messengers' or, more correctly, 'Manifestations of God') are represented by a nine-pointed star, one of the symbols of the Bahá'í Faith. The three parts of the oratorio represent three different phases: 'The Early Years' (Hindu, Judaism and Zoroastrian); 'The Age of Enlightenment, Son of Man and the Seal of the Prophets', (Buddhism, Christianity and Muslim); and 'A New Universal Cycle - the Cycle of Fulfilment', as expressed by the three major figures of the Bahá'í Faith (The Báb, Bahá'u'lláh and 'Abdu'l-Bahá). The composer has supplemented the religious texts with comments and typical questions in which the quotes provide some answers.

The major points of focus which show the similarity between the teachings of these religions are: they show that there is only one Creator-God; they all teach about love and they all believe humans move onto another form of life after the physical body has died. By accepting and focussing on these similarities and not on the differences, through a greater understanding, society can begin to evolve a civilisation of peace. This is the promise of 'The Most Great Peace' as expressed by the Writings of the Bahá'í Faith.

Questions from customers about Nine-Pointed Star

What do you want to know about Nine-Pointed Star?