See a page from No Fiddle Hoe 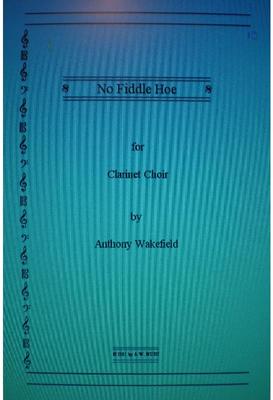 An English Hoe-Down? Well why not! Ideal for end of concert encore, with room for a few ?English? 'Yeeeehiiiii`s'. Written for larger ensemble than normally recognized, using 3 solo Bb clarinets in addition to tutti clarinets 1, 2 and 3, requiring two each of alto and bass clarinets.

His compositions have brought him awards in 1996 and 1997 from the Clarinet and Saxophone Society of Great Britain.

He composed the title music for "The Battle for the Falklands" video, produced in 1982 by Granada/ITN.

As an arranger/orchestrator, his work has taken him into the recording studio and concert hall with the London Symphony Orchestra, Royal Philharmonic Orchestra and the BBC Concert and Radio Orchestras. He is also in demand as an arranger and composer for the brass band world, his works having been recorded by the Brighouse and Rastrick Band, the Carols of which are a favourite during the Christmas Season. Williams Fairey and the BTM Band, S. Wales having also committed to CD his original Compositions.

Questions from customers about No Fiddle Hoe

What do you want to know about No Fiddle Hoe?