No Sadness of Farewell (vocal score) 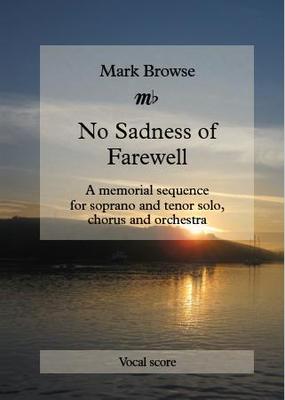 A new choral work which could be described as a sort of Requiem, but with texts drawn from both sacred and secular sources.

The title No Sadness of Farewell is taken from the first movement, Crossing the Bar. As we take our leave from our loved ones there is inevitably sadness, but it can be lightened by remembering a life well lived, as well as by the hope that they now 'rest from their labours'.

There are five movements:

1. Crossing the Bar - a setting of Tennyson's famous poem in which he looks forward to death as the last voyage.

3. Let us now praise famous men - words from the Apochryphal book of Ecclesiasticus, celebrating the deeds of the departed.

4. I heard a voice from heaven - a text from Revelation which is used in the burial service from the Book of Common Prayer.

5. In Paradisum - the liturgical Latin text often included in traditional settings of the Requiem Mass.

This vocal score is for rehearsal purposes only. The full orchestral score is also available from tutti.co.uk.

Questions from customers about No Sadness of Farewell (vocal score)

What do you want to know about No Sadness of Farewell (vocal score)?