See a page from Piano Sonata No. 3

See a page from Piano Sonata No. 3 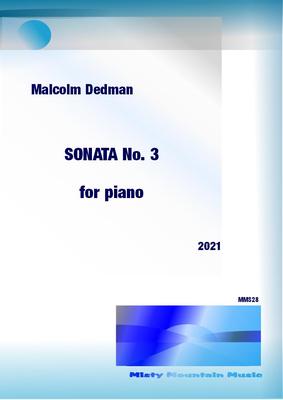 My third Piano Sonata was completed in 2021 and has the subtitle 'to the Memory of an Angel'. It is dedicated to my late wife, Dr Anja Morris-Paxton who passed away after fighting with cancer on 10 November 2020.

Although this is a very personal work, reflecting on key features of Anja's life, these features can indeed apply to any person who, like her, lives a full and satisfying life. The work is in four movements with the following titles: Struggle, Overcoming Difficulties, Spiritual Guidance and Fulfilment - Into the Light.

The first movement, Struggle, is close to Sonata form, with a slow introduction, a fast first subject and contrasting slow second subject. The development and recapitulation section are fused together, such that the division between the two sections is vague. The movement represents a struggle between these contrasting subjects.

The second movement, Overcoming Difficulties, is a kind of scherzando in 6/8 time. The first theme is a four-bar phrase that is treated in different ways. The tempo quickens into a second theme, after which these themes alternate.

The third movement, Spiritual Guidance, is slow and mainly chordal. A short motive at the introduction to the first movement is developed over the chords, as well as high, rapid scale-like figures which represent guidance from above. The chords are further developed and the movement ends with further development of the first movement's introduction.

The fourth and final movement, Fulfilment - Into the Light, starts with an accelerating scale-like passage. The main theme is a return to 6/8 time and the link with second movement is not far away, hence it can be seen as a 'fulfilment' of that movement. Similarly, the second theme is a development of the first movement's second theme. The first theme returns, after which a new theme is stated, mainly chordal, and this could be thought of as a fulfilment of the third movement. Just as the movement appears to be a rondo, the first theme does not return; instead only a return to the introductory scale-like passage, leading to a fulfilment of the first movement's first main theme. This is abruptly cut off and leads to the finale, a very slow, 'Into the Light' section, based on the first movement's introduction.

The music is modal, the nine-note mode being one created for this work: Ab, A, B, C, Db, Eb, Fb, G, Ab. There are many transpositions of this mode and, at times, two transpositions are combined. There is also occasional use of the mode's inversion, a technique I had not used previously. The whole work lasts around 18 minutes.

Questions from customers about Piano Sonata No. 3

Items related to Piano Sonata No. 3

What do you want to know about Piano Sonata No. 3?