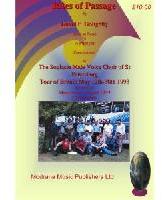 Score of Rites of Passage by David Golightly (includes CD)

The Music of David Golightly, by Alexander Govorov Rites of Passage and Frontiers.

David Golightly's Choral music was the first Western composer's music to become part of Soglasie's repertoire, following the Choir's first meeting with the composer in March 1993. I was greatly interested in his work from the first, particularly as I was familiar with the English style of Elgar, Vaughan Williams, Britten and Tippett. David Golightly's work is indisputably English, but his music also reveals an Englishman with a Russian Soul.

As we rehearsed "Rites of Passage" we were inspired. Working our way towards a better understanding of the choral pieces, we discovered both the composer's love for Pushkin's poetry and the deep sincerity of his talent. The ideas and images of Pushkin's words expressed themselves through the composer's language of music. The great Russian composer, Mussorgsky, said, "Of greatest importance for a composer in creating music is the search for truth". It is this truth we hear when we perform David Golightly's music.

Our further association with this talented English composer developed into a large scale co-operation, "The St Petersburg Mass ", which was composed for and commissioned by the Soglasie Choir. The premiere of this work in St Petersburg in May 1994 was a major event in the musical life of the city and many important artists and composers attended this unique occasion. Professor Mussin, who is head of Conducting at the St Petersburg Conservatoire, commented that it was "Music of the Heart". and it received a ten-minute standing ovation from an enthusiastic audience.

Questions from customers about Rites of Passage (complete T.T.B.B / piano - score and recording)

What do you want to know about Rites of Passage (complete T.T.B.B / piano - score and recording)?