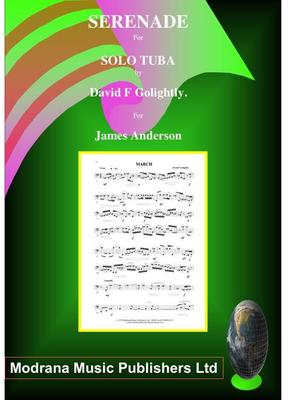 The Serenade for solo Tuba was premiered by James Anderson, Professor of Tuba at The Guildhall School of Music and Drama, London, England in May 1980. My only question is, why did it take so long to get published and into the repertoire of serious tubists all over the globe? It is definitely a welcome addition to the library of the solo tubist. Good solo pieces that are entertaining for audiences are quite hard to come by. This piece will most assuredly be one of those to join the ranks of Penderecki's Capriccio and Gregson's Alarum.

The Serenade is set up in three movements and is metered throughout. The range of the work is from DD-g1. Movement One entitled March, is in 2/4 and m.m. equals 112. It is quite spirited in style and will require a performer with agile abilities to navigate through wide intervals and varied articulations. Movement Two is not your typical slow, melodic song that one would imagine from a title such as Elegy. It is extremely doloroso in nature and has the soloist soaring into the extreme upper range (g1) utilizing strict rhythmic patterns. The Gallop, movement three, is quite animated and encompasses mixed meters with the majority of the piece being in 6/8. Just when you think your triplets are moving along, a duple figure is thrown in to add variety to the melodic lines, which is actually quiet refreshing and prevents it from becoming a boring, technical exercise.

As was stated before, this work will require a performer with great technique. Not for the less than advanced tubist. If you have conquered the other reputable solo tuba pieces, then this one should definitely be next.

Questions from customers about Serenade for Solo Tuba

What do you want to know about Serenade for Solo Tuba?