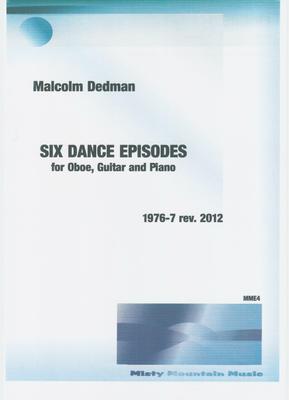 Three of the Six Dance Episodes were written in 1976 and were performed by the Andresier Ensemble in the Wigmore Hall, London, in February 1977, after which the remaining three episodes were completed that same year. They are written for oboe, guitar and piano.

The six episodes are all brief pieces, in total lasting just 11 ½ minutes, and were originally inspired by hearing Japanese Gagaku music.Although not imitating the Japanese style, they all develop short simple ideas and some suggest an eastern form of expression.The exception is the 4th episode, an Intermezzo, which is a medieval dance where the oboe plays a treble recorder and the piano a medieval drum.

It is possible for all six episodes to be choreographed, (the original three, numbers 1, 2 and 6, have already been danced by an amateur ballet company) but the whole piece serves well in concert form.

What do you want to know about Six Dance Episodes?