See a page from Sonata for Pianoforte 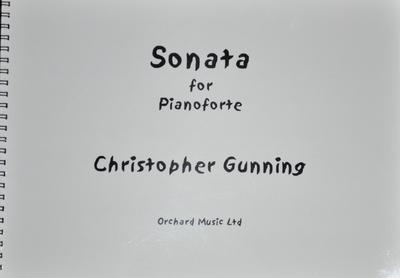 "Although a great deal of my concert music has been orchestral, I have long wanted to write something for the solo piano. It has been my own instrument since, as a boy of five, I first became interested in music, and although hopelessly out of practice now, I still turn to the piano to try things out or if I just need to play. So when Diana Brekalo came along, having impressed me with performances of contemporary music as well as Prokofiev and Rachmaninov, I leapt at the opportunity to write something which would explore her extraordinary technique and musicianship. It was in the winter of 2012/13 that I began, and although I set out to write something that would have elements of a "classical" sonata, things gradually developed and in the event I ended up with five contrasting movements, the first, third and fifth being mostly rather fast and dramatic, and the second and fourth very slow and predominantly quiet.

The first movement is closest to the original "classical" idea, with contrasting motifs which return periodically and a generally optimistic tone throughout - as if we're setting out on a journey. The second movement is very slow with the right hand spelling out a melody and the left hand providing a simple chordal accompaniment; you might perhaps detect my fondness for jazz in this piece. It might also be apparent that outside there was snow on the ground. After a brief, slow introduction, the third movement is fiery and centres around repeated notes interspersed with florid passages for the two hands whizzing around two octaves apart; restless energy is the keynote here. The fourth movement, by contrast, is slow and delicate and is the only one so far to have a title - Cradle Song. But baby won't sleep, and the music stops and starts, each time in a new variation, and mother even tries another tune in the middle. There is a suggestion that sleep might descend toward the end, but it is not certain… The fifth and final movement is mostly stormy, the whole built around augmented triads and arpeggios. I remember composing it during some especially violent winter weather, and it shows - despite there being something a little less dramatic in the middle.

Diana premiered this work in a concert at a church in Notting Hill Gate in March 2015, and has played it several times since."
Christopher Gunning

Questions from customers about Sonata for Pianoforte

Items related to Sonata for Pianoforte

What do you want to know about Sonata for Pianoforte?