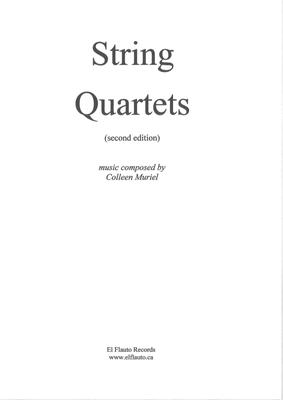 Butterflies and Chimes is very descriptive of literally

Butterflies and Chimes and is filled with beautiful melodic material.

I originally composed this quartet after hearing (in 1998) a local university clock chime on the hour. It sounded beautiful.

It was a sunny day and lots of Butterflies were flying around while the clock was chiming…..….it was what I would call 'a moment'…

..…a moment………. which I have tried to capture in this music.

Originally composed between 1998 and 1999 it was first performed at a concert at Martin Luther Church, Vancouver, Canada on October 3, 1999.

In recent years (2013) and now in 2017 I have revised, and hopefully improved on the original piece (found in the first edition of String Quartets)

The variations on the main theme of Heaven Is like Butterflies Dancing was inspired by pianist David Hamilton's piano accompaniment for a hymn tune I wrote called The King of Love.

Menuetto and Trio is modelled on the string quartets of Haydn

and was first performed in a concert at The Lutheran Campus Centre at UBC, Vancouver, Canada on May 31, 1997.

In keeping with the classical style there are minimal dynamics and articulations.

The difficulty level of the music in this quartet is approximately

What do you want to know about String Quartets (second edition)?