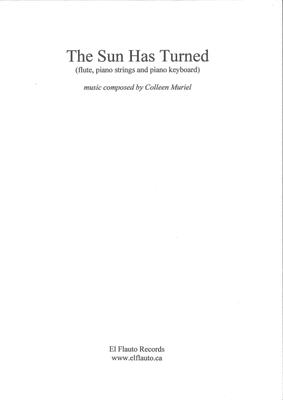 Ideas Behind the Music

The Sun Has Turned *

I grew up in the beautiful province of B.C.,Canada where I was privileged to spend many summers in the interior and northern interior sections of this amazing province. The scenery is stunning and so very unique. What a fantastic way to spend the summers of ones youth.

As long as I can remember the month of August would have forest fires in many areas and there would be warnings and notices as to where it was safe or not safe to hike and camp etc. As someone who loves hiking in isolated areas it was very important to be informed about forest fires.

Sadly I started noticing over the years that the fires were starting earlier in the year, lasting longer and covering a much larger area. According to scientists this is a direct result of global warming and climate change.

So when I thought about writing a piece of music to describe some of the problems caused by global warming I naturally thought about the forest fires I had grown up with and how they were appearing with greater frequency, were harder to contain, and harder to put out.

A couple of times when I was overly close to a couple of forest fires I noticed how the sky would appear to be on fire and the sun would disappear behind the smoke of the fire. It seemed like the earth itself was on fire and like the sun had died and all that was left were the flames and smoke. This piece of music is my attempt at musically describing what I saw.

The piece of music is divided into three main sections -

The Sun Has Turned

(the trees are burning, flames reach to the sky, the elements shall melt with fervent heat, the sun tries to set)

The Sun Has Turned

(burning embers, lightening strikes, the sound and song of despair, the sun has set, the sun is no more)

….for fire has devoured the pastures of the wilderness, and the flame has burned all the trees of the field…..Joel 1:19-20

The Sun Has Turned (flute, piano strings and piano [1 or 2 pianos]) is approximately 2 - 3 minutes in length and written for three musicians.

Where there are two pianos

When only one piano is used the pedal markings for the piano strings are to be observed.

When there are two pianos each piano is to observe the pedal markings indicated for that particular piano.

There are two copies of the score in this book. One has one system per page and the other two systems per page. Musicians can choose which score or mixture of scores works for them.

It is important to note that there is a point in the music where there are two options. The musicians are to pick either Option 1 or Option 2 (not both).

In the score with one system per page

In the score with two systems per page

Options 1 and 2 are on the same page.

In the flute part

Accidentals apply only to the note they directly precede.

The piano string glissandos are to be played slowly (except where indicated otherwise) either in a straight line or circular manner with the fingers creating an ethereal quality.

Questions from customers about The Sun Has Turned

Items related to The Sun Has Turned

What do you want to know about The Sun Has Turned ?