See a page from Symphony 3 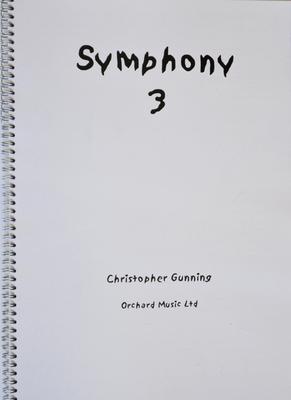 Symphony No. 3 was composed in the aftermath of a turbulent 2005. The work is an expression of this anxiety and the result is a chaotic, colourful musical landscape inspired by the Welsh countryside to which he escaped.

"These two Symphonies are splendid achievements. The 3rd Symphony is dark and brooding for it was written at a time of crisis in the composer's life - his wife was hospitalized with a seeming incurable medical problem and he was diagnosed with a heart condition. It is natural for a composer to put personal matters into his music and this is what Gunning does here, to try and understand his situation. Five sections played continuously investigate the possibilities thrown up by the opening material. It's cogently argued and endlessly fascinating. If Roger Wright wants a contemporary British Symphony which could be a real and instant winner at the Proms then this is it. It's fabulous stuff."
Bob Briggs

Questions from customers about Symphony 3

What do you want to know about Symphony 3?