See a page from Symphony 6 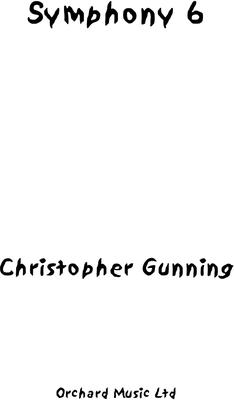 Symphonies 6 and 7 were composed during 2010 and 2011 respectively; each is a little over 20 minutes long and in a single span with several contrasting subsections. Separating these on the CD is "Night Voyage," a shorter orchestral piece. In these performances I am once again conducting the Royal Philharmonic Orchestra, with whom I worked on Symphonies 3, 4 and 5.

I had just moved house when I commenced the 6th - it was a big event in my life about which I felt totally optimistic, and I felt excited about composing something generally less tortured than some of the music in the much larger 5th, but it still has its quotas of drama and emotion. I tried to make it more direct, with simpler ideas and textures and clearer orchestration, and nearly everything stems from a woodwind phrase at the beginning. This recurs as a connecting "leitmotif" at various points, and the various subsections are based on it too. I like my music to have a strong narrative, and think I work much like a novelist, with my characters being the themes and motifs, and here there are five main sections forming a journey - slow and thoughtful, fast and increasingly dramatic, slow and expressive, fast and mostly perky, and lastly a coda drawing on earlier material."
Christopher Gunning
"The most instantly memorable aspect of the Sixth is a sense of the hunt or at least of speed. If, from time to time, you think of Herrmann's tetchy and angst-ridden moodiness and of the music for the rain in Psycho then you will not be alone. The music rises to climactic statements and moves on to tenderness. The overall effect broadly places the music in the Alwyn/Sibelius category. One is often conscious of an air of regret or anxiety suggested or directly stated. This returns strongly affirmed at the end of the work's 22 minutes. In his liner-note the composer indicates his hope that the music has a strong narrative but stresses that there is no specific story."
Rob Barnett read full review http://www.musicweb-international.com/classrev/2014/Jul14/Gunning_sys_DMV112.htm
"This release of his two latest symphonies reveals him to be - as on earlier issues - a genuine composer, concerned with developing in large-scale forms the ideas which have come to him.

The result in this instance is a deeply-impressive pair of works, both being big single-movement structures. In the Sixth Symphony, Gunning is concerned essentially with a five-note figure that is to provide the material for the entire work. In terms of musical language, Gunning may be entirely his own man, but one cannot help but feel influences from Britten, Sibelius and Hindemith, yet these are fleeting allusions - in much the same way as one can trace influences from Stravinsky, Tchaikovsky and Reger in each of those three masters. One mentions these names as pointers to listeners who have not encountered Gunning's music, Not for him earlier or prevailing 'fashions' or thoughtless minimalism, but a genuine commitment to his self-imposed task in hand. Those who are attracted to the English symphonism of Rubbra or Robert Simpson, or of current practitioners such as David Matthews or Matthew Taylor, will find a kindred spirit in Christopher Gunning's work."

Questions from customers about Symphony 6

What do you want to know about Symphony 6?