See a page from Symphony 7 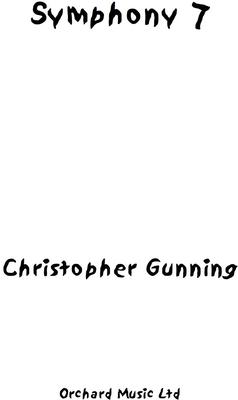 The theme of journeying is carried through to my 7th Symphony. Like the 6th, the music is continuous but this time falls into six main sections, or "phases," all founded in various ways on the rising whole-tone scale heard at the very start. I had in mind a long challenging journey; you can imagine the ascent of a high mountain, or something more psychological - fortunately music can hardly ever be specific and surely one of the joys of listening is that everybody brings their own life experiences to bear.

Phase one is slow and thoughtful, which you could regard as waking from sleep and pondering the task ahead. A far more active phase follows, mostly optimistic with hints of something heroic. With phase three we enter a mysterious, foggy world with the blurred outlines of mysterious shapes. Phase four, by contrast, is relentlessly rhythmic with a steady pulse, becoming ever more dramatic; the idea of struggling against formidable odds was uppermost in my mind. A short break in tension follows, a prelude to a return of the optimistic music heard in phase two. Again this subsides and the thoughtful, quiet opening music returns briefly. This proves to be preparation for the final main section, with its confirmation of A Major, and the summit. At the very end, we hear the quiet rising scales from the opening, this time high in the violins; is this exhaustion? Or perhaps a hollow victory? You decide…"
Christopher Gunning

"The Seventh Symphony is an even finer work than the Sixth, although its opening pages struck me as being a risky undertaking for the composer in that the material is not so clearly organic in its flow, but the attentive listener will find their attention held by Gunning's imaginative juxtaposition of that varied and unexpected material. He follows the relatively brief opening with an extended section of very slow-moving music, from which the emergence of a rhythmic figure - such as pervaded the Sixth Symphony - gradually generates a welcome contrast of pace and texture.

Repeated hearings of the opening paragraph reveal the extent of the composer's creative imagination in divining the full potential of his initial ideas. As the work progresses, Gunning's control of pulse is particularly impressive - wholly organic and germane to the musical argument as the gradual unearthing of a tonal basis approaches. The Symphony may appear to be reaching the heart of the argument: but this is a genuine faux-bourdon, for Gunning has much more to extract from his material as the music now expands freely, exploring where it will go, yet this is not an 'anything goes' attitude for he is too good a composer not to be able to realise the potential of his ideas through a large orchestral palette and a long-breathed (almost 28 minutes) structure.The gradual ascent to the bright key of A major is superbly controlled and its ultimate arrival is a genuinely thrilling moment. But Gunning has more to give us: the music now expands in a glorious stretch of power before it fades from our perception, as, finally gathering his forces, Gunning leaves us with a solemn coda of great nobility and sense of achievement."

Questions from customers about Symphony 7

What do you want to know about Symphony 7?