Symphony No.1 - score and recording 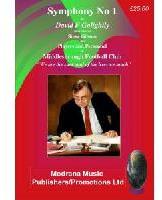 Score and CD of orchestral music by David Golightly performed by the City of Prague Philharmonic.

This extraordinarily powerful work was written for the Middlesborough Football Club, Chairman and players and has been adopted as their Anthem.

Also on the CD are David Golightly's Three Seascapes.

The Prague Philharmonic Orchestra is conducted by Gavin Sutherland.

David Golightly: Symphony No 1: Three Sea-Scapes. City of Prague PO/Gavin Sutherland. Reviewer Hubert Culot The British Music Society Some 45 minutes long, the Symphony is very accessible in idiom, a "Classic FM work",no more "difficult" than say George Lloyd or William Alwyn (Golightly, like Alwyn, has composed film music), with traces of Shostakovich;s influence. It is well argued, though the preludial first movement might be slightly shorter with advantage, and finely scored. The performance by the Prague players under Sutherland;s assured direction is excellent. The filler is attractive, too: a lightish suite, each movement based on a different sea-shanty: Fire Down Below, Shenandoah and Rio Grande.

DAVID GOLIGHTLY: Symphony No. 1, Three Sea Scapes. Golightly's symphony is a big, ostinato-driven, muscular piece, tonal and constructed out of the musical equivalent of big, solid blocks, or painted in broad brush-strokes of primary colors. It seems to be the proof in music of Grainger's words to the effect that the English are 'passionless about everything except football' - because it is dedicated to a football club (Middlesbrough) and its manager, and extrapolates from these men of sport and mud to hypothetical Promethean strivers, builders and visionaries everywhere. Whether or not you are as passionate as Mr. Golightly about soccer, the symphony is one of those big-boned, tonal, neo-romantic pieces which can be relied upon to get the blood pumping a little faster. The Seascapes are appealing orchestral fantasias in familiar style, also bold and colorful. City of Prague Philharmonic Orchestra; Gavin Sutherland.
Reviewer Jeff Joneikis Records International.

Questions from customers about Symphony No.1 - score and recording

What do you want to know about Symphony No.1 - score and recording?