See a page from These Fruitless Strifes 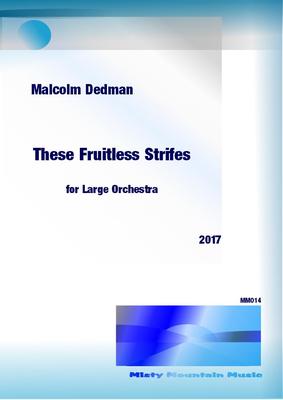 These Fruitless Strifes was written in 2017 and is a major work for large orchestra, lasting nearly 28 minutes. It arose out of the increase in terrorism in this century, in particular, since the attack in New York on 11 November 2001.

The work is highly dramatic and is in 5 movements, as follows:

Although the work focuses on one major devastating historical event, it can apply to any similar situation, including outright war. The work is prefaced by the following quote by 'Abdu'l-Bahá Abbas Effendi:

We desire but the good of the world and the happiness of the nations -- that all nations should become one in faith and all men as brothers; that all bonds of affection and unity between the sons of men should be strengthened; that diversity of religion should cease and differences of race be annulled -- and so it shall be; these fruitless strifes, these ruinous wars shall pass away and the most great peace shall come. Is not this that which Christ foretold? "Let not a man glory in this, that he loves his country; let him rather glory in this, that he loves his kind".

Questions from customers about These Fruitless Strifes

What do you want to know about These Fruitless Strifes?