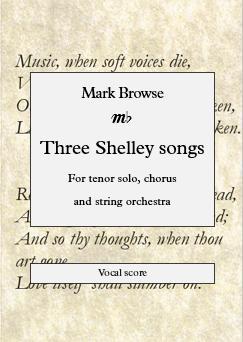 For a composer of vocal music living in Warnham (West Sussex), setting the poems of Shelley would seem to be an obvioius choice: the poet was born in Field Place, just outside Warnham, and baptised in the parish church, whose vicar was also his first tutor.

I have chosen to set three contrasting lyrics:

Love's Philosophy is Shelley's take on the age-old complaint of the lover whose beloved is a bit reluctant. Everything in nature mixes together, argues the poet, so why not you and I? The chorus sings most of the descriptive words, leaving the tenor soloist to make the more personal pleas.

One of Shelley's best-known poems, Ozymandias is a striking image of fallen pride and the transience of all things. In my setting, most of the words are given to the tenor soloist, but there is an important part for a solo viola, whose mournful tone provides a perfect accompaniment to Shelley's 'lone and level sands'. The famous proclamation written on the fallen statute is given to the tenors and basses of the chorus: Look on my works, ye mighty, and despair!

The final song is Music, when soft voices die. Muted strings and hushed chorus echo the poem's imagery of remembered music and faded flowers, building up to a shining climax on the words 'love itself ...' before fading away as the soft voices die.

This vocal score is for rehearsal purposes only. The full score is also available from tutti.co.uk

What do you want to know about Three Shelley songs (vocal score)?