The Transit of Venus

See a page from The Transit of Venus 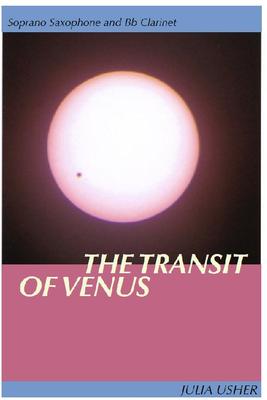 The first scientific observations of the Transit of Venus occurred in 1639; made by a 22 year old astronomer, who estimated when the event would take place; and that he could observe it from his local village church - Much Hoole in Lancashire. His famous accurate measurements allowed astronomers to make entirely new calculations on the distance of the earth from the sun.

Inscribed on the tower of the village church, are still to be seen the words SINE SOLE SILEO, on the face of the sundial. This means "Without the Sun I am Silent". I used this idea throughout the duet, as the clarinet suggests the radiant but distant sun; and the boiling langorous sax plays Venus passing across it as a black dot. When the clarinet fades, several times during the piece, venus too must fall silent. At other times, both instruments fuse into unisons or octaves, as in a "conjunction", with which the piece ends.

The original recording made by the first performers of " Transit" - Ian Mitchell (clarinet) and Christian Forshaw (Sax) - was used in a year - long residency by Julia Usher in collaboration with the University of Central Lancashire (UCLAN), 2011 - 2012. The climax of this wide - ranging multi - disciplinary project was a live performance of the piece in Much Hoole Church itself, where Horrocks observed the Transit. The performers, in real time during the night of June 6th, were Debbie Scherer ( sax) and Matthew McGuffie (clarinet). They played the duet at the beginning, and at the end, of the Transit, against a backdrop of a projection of the live feed from ASAa, in the church. In turn, these two timed performances were uploaded to the NASA Satellite, and were seen around the world.

Questions from customers about The Transit of Venus

What do you want to know about The Transit of Venus?