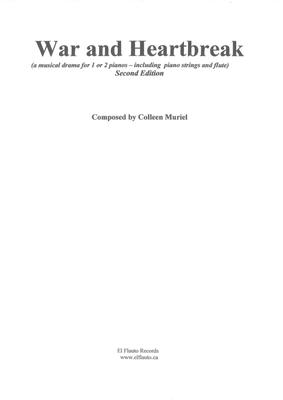 About The Music - A Little History

War and Heartbreak (originally published in 2013) was written between May 2006 and August 2008. It was first performed and recorded at St. John's Church, Waterloo, London, England on August 29, 2008 [Ben Pinnow (piano)/Colleen Muriel (flute)]. As a result of this premiere performance and recording War and Heartbreak is dedicated with appreciation to Ben Pinnow.

This second edition includes a few alterations (2019) and is written for 1 of 2 pianos (including piano strings) and flute.

Sadly this piece was inspired by the six o'clock news (May, 2006), which featured a story about yet another conflict in the middle-east. This time it was Hezbolah firing rockets into Israel. War and Heartbreak however is not just about physical war and the devastation that causes - it's also about those internal personal and spiritual wars that mar our lives causing devastation, confusion and despair.

The two or three characters (musicians) of War and Heartbreak play their own subtle dramatic roles.The piano player(s) represent solitary figures who are greatly impacted by the act of witnessing the destruction of War. The pianist(s) is/are the only people who are on stage for the whole performance.

The flutist represents a casualty of the war. In fact, this composer wrote this piece with a view to the flautist getting killed in battle. The flute player only comes on stage to play her/his lines and then leaves. I deliberately did not have the flute play at the end of the piece since the flutist is dead. The piano (pianists) is/are left alone. Their friend (the flautist) never returns.*

Included in this piece is a tango, which becomes a war dance and an adage (slow waltz) for one.

The strumming of the strings inside the piano is a feature, which serves to unify the work. This musical gesture also serves as a premonition of the despair to come. The flautist who is in effect the caster of spells, the dabbler in magic; is seen both as the instigator and casuality of the war.

*The two different spellings of flutist (flautist)/flautist (flutist) is deliberate.

This piece of music has 12 sections/movements.

They are as follows:

The Caster of Spells

Dance of Rage (The Second War)

Bombs in The Afternoon

Questions from customers about War and Heartbreak

Items related to War and Heartbreak

What do you want to know about War and Heartbreak?