See a page from Wherever Next 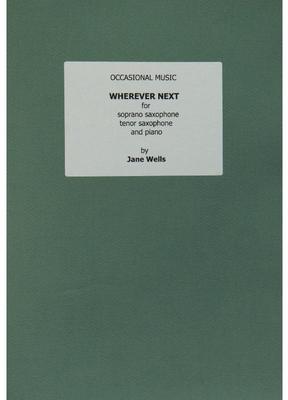 Composer, Jane Wells, has a catalogue of around fifty compositions.They range from half evening music-theatre, choral and orchestral pieces to short instrumental solos and duos and songs for choirs that are eminently programmable concert pieces.Or some of the latter may simply be just good to work on and enjoy in the comfort of your own home.

Her first pieces date from the mid-1970s when she also wrote music extensively in collaboration with choreographers for performance with dance.

Jane writes in an approachable contemporary classical idiom but - be warned - she particularly enjoysincluding dancey asymmetrical rhythms!Many of such passages are really fun to play as long as 5/8s and 7/8s are in your comfort zone.

She has frequently composed for saxophone as it is the instrument that she plays most herself which gives her a particularly good familiarity with the idiosyncrasies of this instrument.

Five chamber music pieces, including Wherever Next, are released on her Occasional Music CD (Metier MSV CD92043) which you can find on tutti by following this link

The sound excerpt from Wherever Next is taken from the CD and performed by Composers Ensemble conducted by Peter Wiegold - Duncan Prescott (sop sax), Richard Addison (tenor sax), Catherine Edwards (piano).

The player score and and saxophone parts are printed on B4 paper (353x250mm) for easy reading. You can view a sample page above.

Jane directs two singing groups, both of around 40 voices. She has composed several practical short two or three part songs for these forces where the men- often hugely outnumbered -can double the lower part at an 8ve from the women and the higher women's voices are never quite required to manage a full soprano range!

Read more about this composer at www.janewellsoccasionalmusic.co.uk

Questions from customers about Wherever Next

What do you want to know about Wherever Next?